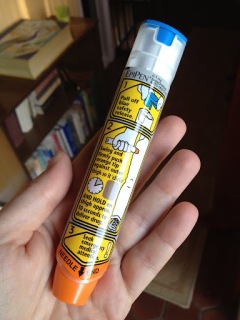 I don’t often talk about my kids online. They’re teens and I feel it’s inappropriate to discuss them or post pictures without their permission. However, when I finished reading my email this morning, the urge to speak up was overwhelming. Both of my sons have severe food allergies. That photo you see above? It’s been part of my daily life for sixteen years. It’s been part of my sons’ lives since forever. We don’t go anywhere without an EpiPen, prednisone, and Benadryl. In fact, we usually carry extras around because my paranoia knows no bounds.

Yesterday my seventeen year old had to go to a computer science competition practice after school. They were serving pizza, and like usual I told him that as long as he knew where the pizza came from and could ask about peanut ingredients, it’d be fine if he ate some. He refused. He told me that he was really tired of always having to worry about his allergies and didn’t feel like expending the energy to check with the pizza place (we generally call and speak with the cook/manager). He packed food from home for himself. Then he told me something that made my blood run cold. He said that in another club of his, the kids often gave him a hard time when they ordered pizza. They asked him why didn’t he ever eat it and made fun of him—all the usual stupid shit teens (and adults) do to those who don’t conform to their idea of normal. Disgruntled and frustrated, my son told me that there’s another teen in the club with a peanut allergy. Apparently, this kid eats pizza and a lot of other things without worry, care, and most disturbingly, WITHOUT CARRYING AN EPIPEN.

There are two reasons why this freaked the hell out of me. One, since when were kids giving my son a hard time? I had no idea. He’s a teenager and that means he has assumed a certain amount of responsibility in his life. He doesn’t tell me every single detail of what happens at school and that’s fine. However, if I’d known the other kids were doing this, I would’ve been more than delighted to go to his club and give a detailed description of how much fun we had that one time when I had to rush him to the hospital. Anaphylactic shock is AWESOME! Watching your kid’s eyes turn glassy and his whole body turn bright red? TOTAL GREATNESS. I mean, what could be better than wondering if your kid is going to stop breathing? Or, you know, LIVE? I could’ve described how cool it was watching the ER staff hook him up to multiple IVs. How damn wonderful it was watching them rush around my son, controlled urgency in every movement.

I suppose you can tell I’m being a bit sarcastic here.

The other thing that bothered me is that my son told me the other kid didn’t carry an EpiPen. This saddened me greatly. I know a number of people with severe allergies (food, environmental, etc.) who really should carry an EpiPen but don’t. EpiPens are not large. They can save your life. Some researchers are even working on a new version of one that is as small as a credit card. You’ll be able to carry it in your wallet. There are two reasons why most people don’t carry one: 1. too much bother and 2. other people make fun of you when you carry an EpiPen.

My son doesn’t deserve to have to deal with stupid kids giving him a hard time about his allergies. Kids suck. High school sucks. I remember when my peers made fun of my glasses, my crankiness, my general “you’re not like us”-ness. Whatever. I got over it. That stuff didn’t threaten my life. The thing is, my kid could DIE. The stuff he has to deal with could KILL HIM. Sure, most parents worry about their kid getting hit by a car, falling in with the wrong crowd, or just doing something dumb—I worry about what my kids eat. The food they put in their mouths can kill them if they don’t know what’s in the ingredients. And what do their peers do? Oh, hey, look at him! He won’t eat the pizza, he’s such a dork!

My nephew is allergic to casein (the protein in milk). My younger son has a heart defect and thinking about that sometimes scares me to death. Another nephew has multiple health issues (liver transplant). I’m used to worrying about shit I can’t control. I’m used to expecting the worst at the most unexpected possible moment. What really pisses me off though is the complete and total narcissism of our society. Homophobia, racism, bullying—these things make me angry. Why do teens act like this at school? Why do they treat kids like my son who has allergies, or gay kids, or non-white/non-black/non-hispanic (oh yes, racism knows no bounds, believe me) kids like crap? Because the adults in their lives act like that and we all learn by example.

We tell our kids that it gets better. That when people grow up, they magically turn into fair, nice, respectful individuals. Um, no they don’t, not all the time. How about we stop lying to our children? Adults suck just as much as kids do. Many grow up and get a clue and manage to learn how to treat other people well, but many don’t. And until we stop lying to our kids about this, the fake culture of “people are nice” is going to persist. Peer pressure is an incredible thing. It creates riots. It makes teens act like jerks. It can also move an entire society from hatred toward peace. Toward equal rights. Toward research that improves our planet and saves our children’s lives. Let’s admit to our kids that we’ve messed up. Acting like that is not okay. In order to change the world, in order to make sure teens don’t continue to propagate evil, we adults have to start owning up to our own shameful tendency toward pointing fingers. We need to not pass this crap on to the next generation.

In my email this morning I received a note from my local chapter of a food allergy support group. In it was the news that yet another teenager had died from eating cookies that he thought were safe. They rushed him to the hospital but he’d stopped breathing within minutes of eating the cookies. His brain was dead. The thing that stood out to me the most? This boy DIDN’T CARRY AN EPIPEN. I don’t know why, but I can guess: his friends/peers probably made fun of him.

What do I have to say to every kid with an allergy (or who is different)? Stand up for yourself. Stand up to adults (if you can safely), to other kids, to whomever you have to and tell them that your life is more important than their need to make you conform to their idea of normal. Oh, and carry your EpiPen, for crying out loud. Hide it in your pocket, your backpack, your purse, but don’t ever, EVER, leave home without it.

~~~~~
ETA: Having a food allergy does not define who you are. I’ve made it a point to teach my kids this idea. Their life is not their food allergy. They are not a label, an illness, a paranoia. The thing is, no one else in their life should be defining who they are by their food allergy, or illness, or the color of their skin, or whatever, either. When other kids give them a hard time about what they eat, they are, in essence, saying: Oh hey, you’re the freak with the allergy! Sucks to be you.

Yeah, no. It doesn’t suck to be a kid with a food allergy unless you let it define your entire life. Don’t let it. Don’t let anyone else do it, either.

I once knew a woman who wrote by sticking a pencil in her mouth. I know a man with Parkinson’s who uses a voice recognition device to write. I think of them as poets.