I am delighted to announce that one of my poems will be appearing in the Friday Evening Classics radio show with Will Duchon this Friday evening. The Words & Music segment begins at 9 pm. Tune in to listen to my poem, Despina, moon of Neptune. I wrote it this past April during NaPoWriMo.

Thanks, as always, go to Will Duchon for hosting this lovely show. 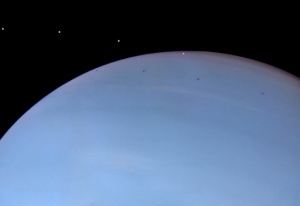 She said she’d rather sing alone
than perform for some random guy,
but then Voyager 2 flew by,
eyes trained on her curved form
like a desperate man (the kind
whose lady walked away forever).
He just didn’t know when to look aside.
She said she tried to hide, quiet her light
against her father’s blue sky, but the lens
found her four times. She gave up
silence for fame, gave up space
and time, until the sun finally fell
down across the steely horizon.
Her father Neptune didn’t seem to care
and that was what hurt her most.
The galaxy beyond everything she knew
was so much less infinite than she’d hoped.
The camera took what he wanted
and left. Despina endured the scrutiny
of a thousand careless eyes—

In the end, she would only wear white,
the color of purity, and not even the dark
could get her to sing anymore.

Quite a dramatic color change. Novel edits and painting are not the worst ways to spend a week. 😊 #writersofinstagram #author #painting #purple